Le Wand is a beautiful toy. There's no denying the elegance of the shape and styling of this wand massager. I received the Space Grey colour and really loved the aesthetics of the metallic silver and grey. It also comes in Pearl White which is pretty with the rose gold accents but I think the grey is a much nicer option.

The head of the wand is a velvety silicone that feels wonderful under the fingers, although does collect and show dust and cat hair to an impressive degree. It's rechargeable and with a full charge of 3 hours will give 3 hours of vibrations. Included with Le Wand are a charging cable, zippered storage case, and a textured wand cover. I also received the Curve attachment (not standard) which is a silicone attachment that allows for internal g-spot or prostate stimulation.

Le Wand has 10 different speeds and 20 vibration patterns, aiming to please as broad an audience as possible. It's splash-proof, so easily washed, and the silicone head is easy to disinfect for sharing. The neck is flexible which allows for some positional variety. It's heavier than the rechargeable Magic Wand but lighter than the Doxy Die Cast. The weight could be an issue for people with mobility or strength challenges in their hands.

I wanted so badly to love this wand. There is so much really great stuff about it but it simply didn't work for me. Some of the issues are related to design that I think they should address. Other issues arose because Le Wand was not designed for a body that works the way mine does. I'm sure that many bodies would have countless orgasms with this beautiful piece of machinery. Alas, mine wasn't one of them.

To start, Le Wand is buzzier than expected from such a powerful wand. Some people would love this, it didn't work for me. By level 4 of 10 it had reached the same level of buzz as the Magic Wand Rechargeable hits at 4 but its lower levels still have more buzz than rumble. The up and down buttons function to cycle through speeds but you have to cycle through all the levels down to turn Le Wand off rather than a press and hold option. That can be a challenge when a person is wobbly from orgasm. The vibration button was located between the up and down and I hit it by accident several times as I cycled through speeds.

Personally, I require a lot of surface area on a wand to get the vibrations through my body to internal clit tissue. The rounded head of Le Wand made it harder for me to get as much surface against me so I couldn't get the required amount of contact. As well, since I tend to use a wand lying on my stomach, holding the head against me as hard as possible with my fingertips, the narrowed bottom of the head meant the metal ridge between the head and neck dug unpleasantly into my fingers. These issues might be particular to only me but they're worth mentioning. 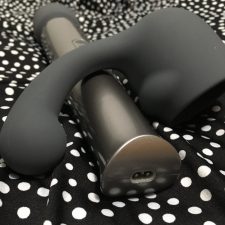 The Curve attachment is made of same lovely grey silicone as head of Le Wand. It looks rather like Gonzo the Muppet's nose with a bulbous tip. The tip is weighted to deliver the vibration deep along the curve. I thought this was going to be so perfect for me but again, a feature that would be awesome for others wrecked it for me. There's a bump on the base of the Curve attachment meant to go against your external clit. That bump meant I couldn't get it close enough to me to vibrate all my deep tissues. It was rather maddening. Perhaps they could make a couple versions–one with bump, one without? Instead of the raging orgasms I expected, I ended up heckin' frustrated.

The other challenge we had was with getting the attachment on and off the head. They mention on the website that it fits snugly. They ain't kidding! It took two people wrestling with it to remove the attachment once it was on. Perhaps lube between layers would be the way to go. I ended up trying the attachment with my other rumblier wands to see if it was the buzz factor that stopped me from being able to get off, but that cursed bump got in the way no matter what.

My experience with Le Wand was less than stellar ultimately but it is definitely a case of ‘not for me' versus ‘not a good product'. I suspect a lot of people would have wonderful experiences with this wand. It appears to be a high quality product…that couldn't give me a single orgasm.

Please note: Le Wand was generously provided to me by Le Wand in exchange for my honest review. My notes and opinions are my own. Visit Le Wand's website here.

My experience with Le Wand was less than stellar ultimately but it is definitely a case of 'not for me' versus 'not a good product'.