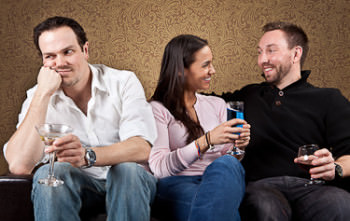 You always remember your first: first car, first love, first sex and first time to the club. My love and I signed up to a club about 45 minutes away, close enough to get to easily but far enough not to meet the neighbors (we hope!). Together, we dutifully attended the initiation with the safety tour (gotta watch those fire exits) and the club rules (to avoid social faux pas.) Funny thing, she was totally relaxed. Nobody was going to try and fuck her without her consent, and it seemed safer than even a regular nightclub. I, on the other hand, had a deer in headlights look. My thoughts soared as I tried to come to terms with what I was signing up for. This is real! This is actually going to happen. These people are going to have SEX and they are going to do it right here!

OK, if there were any doubt that I am a complete dork, this should have dispelled it.

Being completely new to the world of swinging we had agreed ahead of time we would stay together, stay for two hours, and then go out for coffee and desert afterward to talk about the experience. Not knowing swingers, we arrived as soon as the club opened, eager to get through the safety tour and then see what would happen. Nothing did.

First lesson I have encountered: swingers tend to be night owls. They may have day jobs and get up early 5 days a week for the vanilla world, but tonight they started late. After two hours one couple had finally started getting it on in one of the “open” room where we could view the action. Mind Blown… damn…whoa…ok I ran out of interjections. For someone who never witnessed other people having sex, this was intense. I am guessing for those in the lifestyle this is not news. I imagine newbies must often go through this when they have their first experiences. I never thought of myself as a voyeur, I will admit I never really took the opportunity to try it out until then, but I liked this! I wondered if my love and I looked like this when we made love, when she goes down on me do I look like that? What is the look on the guy’s face…passion? lust? Does the act of love naturally look a little awkward when it isn’t porn? How long can I actually stand here gawking before this gets uncomfortable? What would it take to get invited in? How on Earth am I going to get from here on one side of the door to the other? I could see where I think I wanted to be, but did not know how to bridge the gap.

My love was perfectly fine (meaning go ahead and she will stay right here on the couch) letting me wander about. I’d like to say I started a conversation with people there and got to know people right away. But I didn’t.

I am not the most social of people. If you are thinking to yourself that this is going to hamper my swinging…you’re right! I don’t know whether I expected everyone to jump right in to full on anonymous group sex, or simply did not contemplate that I would have to maintain my side of a conversation. I was silent and maybe a little withdrawn, anchored to my wife like a life preserver to protect me from having to talk to people I had hoped to fuck. What the hell is wrong with me?

Two hours in, it was clear I was not quite ready for this. I needed to fall back and regroup a little. We left, somewhat to the disappointment of several of the staff (who I did talk to and were very kind) and made the lame excuse we ran out of babysitting. We spoke about it in a restaurant a while later, she over cheesecake, while I had a very large beer. My love said the club was very nice, but as we had agreed previously she could not return to it. I was on my own and I would have to figure it out. She would listen and help me as best she could but I needed to find the answers. I had scheduled the following week to attend as just myself, alone and swinging singly.

Reply To The Salmon Cancel Reply