This is a guest blog from Mr Sfcuties: Read his blog here!

As a kid, it was normal to go swimming in the nude.

It was OK to walk through the house naked coming from the shower.

It was also perfectly normal for grownups to have sleepovers at their friends.  Just bring enough sleeping bags, and toss all the kids in one bedroom when it's their bedtime, and everything works out perfectly.

It was normal that ads on prime-time TV or in the streets show nudity, especially if the product was supposed to be used when nude (lingerie, shampoos,…).  That just makes sense, doesn't it?

As an adult, nobody thought it weird to go to saunas or “day spa's”, where everybody walks around nude most of the day.  If you meet somebody from the office in the shower, you just say “hi”, like you were meeting them on the bus.

In politics, Europeans are nearly impossible to provoke using the personal life of their leaders.

When it was shown that the king of Belgium has an illegitimate daughter, some people snickered. a few cheap jokes were created but nobody got excited.

When french president Mitterrand died, his mistress and their daughter also attended the (nationally broadcasted) funeral. Nobody protested.  Everybody understands that power has its own sex-appeal.

As a swinger in the US, I have gotten used to the elaborate setups for visiting swing clubs.  Secret addresses, pre-meets, special guest-lists, password.  Some have protocols that look you are meeting with a mole inside a Columbian drug cartel.This is loads of fun, and adds to the naughty “secret agent” theme.  I'm used to swingclubs that advertise in clear, neon-lit text.  In 4 languages.

Others have noticed this too:

When compared to other swingers from around the globe, European swingers are considered as the most open to this lifestyle. This is evident through its several sex clubs and nude beaches. If you are a swinger from this continent, you will be able to find other swinging individuals when you visit the aforementioned places.

… European swingers are least interested in swinger games. They jump onto swinger activities as soon as they develop a comfort level with other swingers. They don’t believe in wearing explicit attires to woe the swinger mates. The European parties are simple yet high on eroticism scale. 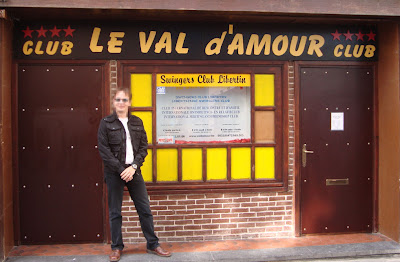 None of this means or claims that Europeans are “better” at swinging (if such a scale even exists), or that they have a higher amount of confidence (I was the most shy person in the room a couple of times).   All this means is that the cultural background of a person can show up in and out of the bedroom behavior in unexpected ways.

I cuddle in public.  I don't freak out about bi men. I have a large Lifestyle Lounge bumper sticker on my car.  I talk about sex, politics and religion at the dinner table.  But I don't bite (unless you ask me to).

I didn't choose to be a swinger. I can't help it.  I was born that way.